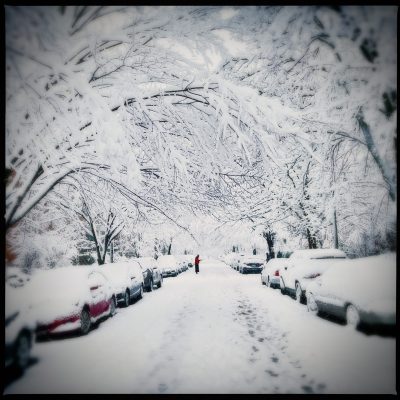 It wasn’t a white Christmas, but I guess it was close enough.

Yesterday, the DMV region was slammed with a Capital S Snowstorm. The National Weather Service reported 8.5 inches of snow fell in Washington by 1 p.m. Monday. The rest of the DMV got anywhere from 6 to 10 inches. This included 7 inches of snow on NBC4 reporter Pat Collins’ back deck, as measured by Mayor Muriel Bowser in the most ambitious crossover event since Avengers: Endgame. The large snowfalls brought a flurry of cancellations. Government services, Metrobus, and COVID testing and vaccination sites were suspended due to the unsafe conditions.

Those conditions were deadly for some. Three people in Montgomery County were killed and one was injured after a car reportedly crashed into a snow plow. Thousands of drivers—including Virginia Sen. Tim Kaine—got trapped on Interstate 95 after icy conditions brought travel to a standstill. Some people were trapped for up to 20 hours. Officials are working to free up traffic, but for now, do not get on I-95. Virginia Gov. Ralph Northam told WTOP they’ve responded to over a thousand crashes since midnight.

“An emergency message is going to all stranded drivers connecting them to support, and the state is working with localities to open a warming shelter for passengers, as needed,” he said.

For those not driving or losing power—the day brought fun to the District! A giant snowball fight took place on the National Mall Monday afternoon. Many residents broke out their skis and children took advantage of their day off by sledding and playing.

Here’s some other non-snow news for your day.

D.C. Public Schools students return to classes Jan. 6, but students and teachers are asking if in-person learning should continue. D.C. is in the midst of its most mind-boggling surge in cases thanks in part to the omicron variant. Johns Hopkins reports just over 9,200 cases in D.C. on Jan. 3.

This leads to the great question looming over education right now. Some students and officials are advocating for temporary virtual learning to avoid worsening the spread. Others say students have lost too much educational ground to leave in-person classes.

DCPS is requiring students to upload a negative COVID test to the school system before their return Thursday. (Classes were originally slated to return Wednesday, but the start date was pushed back due to the snowstorm.) Students’ negative tests must be uploaded by 4 p.m. Wednesday.

The workers of the D.C. bookstore Politics and Prose have had their union officially recognized. Owners Bradley Graham and Lissa Muscatine chose to recognize the union in a collective bargaining agreement Dec. 31. Now 54 employees are represented across three locations by UFCW Local 400, organizing director Alan Hanson told DCist.

“We are proud to join the growing movement of booksellers and baristas across the country who have unionized their workplaces,” the Politics and Prose organizing committee said in a statement. “Forming our union has not only served as an affirmation of our shared values within the Politics and Prose community, it will also strengthen our workplace and ensure the long-term success of our beloved community hub.”

Graham and Muscatine did not initially recognize the union last month and even hired union-busting law firm Jones Day to represent them. But public scrutiny changed their tune.

“As stewards of a local, independent business with a 37-year legacy of progressive management and mission, we’ve valued collaborating with employees to solve problems and address needs, and we look forward to working with the union in the same spirit,” the owners said in a statement released Monday.

To see today’s COVID-19 data, visit our coronavirus tracker.Capitol Hill residents reflect on Jan. 6 and its effects on their community as the anniversary of the insurrection nears. [Post]D.C.’s youngest panda shows us how snowmicron is done. [Washingtonian]

The pop-up that brought D.C. some of the most satisfying sandwiches and snacks during the […]

Customer writes expletive on check at Apéro in reaction to 2 percent fee for employee healthcare. [Post]Could the pandemic have knocked chefs off their pedestals? [Eater]

COVID is once again closing local museums and the zoo, both of which have implemented reduced hours and modified schedules through Jan. 17 due to staff shortages. [Post]Capitol Hill Books released an album yesterday that was recorded in its Eastern Market store during the year-long pandemic closure. [Twitter]

On Wednesday afternoon, early in the second quarter of the Pinstripe Bowl, Maryland quarterback Taulia […]

The Washington Football Team will reveal its new team name and logo on Feb. 2. Wolves and RedWolves, an option that had been popular among some fans, have been ruled out for trademark reasons. [USA Today]

Sign up: To get District Line Daily—or any of our other email newsletters—sent straight to your mailbox, click here. Send tips, ideas, and comments to newsletter@washingtoncitypaper.com.

Related Topics:featured
Up Next

Egypt Pushes for Calm After Flare-up in Gaza Hostilities

While leveraging one trend might work well for a particular brand, trying to incorporate the same trend into another brand’s strategy may not have any impact at all—or worse, it might damage a brand in the eyes of consumers if the effort doesn’t feel genuine to its story and ethos.

NFG has submitted a quarterly adjustment to the Pennsylvania Public Utilities Commission. The move — effective Tuesday — will mean a small reduction in the average monthly residential bill.

According to NFG, the rate adjustment is primarily due to lower market prices decreasing the cost of gas that they buy for customers.

‘Walking Dead’ Actor Moses J. Moseley Dies at 31: ‘You Will Be Deeply Missed’

(NEXSTAR) – Moses J. Moseley, a young actor who appeared in AMC’s “The Walking Dead” and HBO’s “Watchmen,” has died at the age of 31.

Both AMC and a representative at Moseley’s talent agency confirmed the news via social media.

“Our thoughts and prayers are with our #TWDFamily member Moses J. Moseley,” reads a message posted to the show’s official Twitter account on Monday.

Moseley’s body was found on Jan. 26 in Stockbridge, Georgia, a representative for the Henry County Police Department said. He was found inside a locked vehicle with a gunshot wound to the side of his face and a handgun in his lap, according to a police report shared with Nexstar.

Moseley, who portrayed one of the two zombies that Michonne (Danai Gurira) kept as leashed “pets” in the earlier seasons of the series, had also appeared in “The Hunger Games: Catching Fire,” “Attack of the Southern Fried Zombies” and HBO’s “Watchmen” series, among other television and film projects.

“I love you @mosesmoseley we had so many amazing years of friendship together always had so much fun together,” Michew wrote on Instagram. “I am glad you were part of our family for so long I just wish we had longer. You will be deeply missed. #RIP.”

The investigation into Moseley’s passing is ongoing, police say.

If you or someone you know is thinking of harming themselves, the National Suicide Prevention Lifeline provides free support at 1-800-273-8255. Starting on July 16, 2022, U.S. residents can also be connected to the Lifeline by dialing 988. For more about risk factors and warning signs, visit the organization’s official website.